Jul 11, 2014, The Windsor Star
If you’ve been in Windsor’s west end lately you’ve probably noticed the small army of landscapers who’ve been toiling to put the “park” into the $1.4-billion Rt. Hon. Herb Gray Parkway.

Since last fall, crews of between 20 and 40 people at a time have been visible along Huron Church Line and the far western end of the E.C. Row Expressway as they plant scores of trees with skidsteers and backhoes.

With bits of the highway already finished, small parts of the new landscape are starting to take shape. Thousands of trees are already in place atop the berms and in the swales between the lanes of the two-level highway, which won’t be completely finished until well into 2015.

To gardeners and treehuggers like me, it’s been a joy to watch. But only a small fraction of the final plantings that will adorn the parkway’s 300 acres of eventual green space have been done, spokespeople for the project say. The bulk of the new trees won’t be planted until this fall and next spring.

But the outlines of a green, architecturally designed streetscape is beginning to emerge from what’s been a chaotic construction zone for the past few years. Before that it was just an urban jumble of somewhat shabby commercial properties.

Forget about the 10 lanes of concrete for a minute: the landscaping alone on the parkway is a huge job, likely one of largest such projects ever undertaken in Ontario: 24,000 deciduous trees, 3,000 conifers, 35,000 deciduous shrubs (they lose their leaves each winter), plus 2,000 coniferous shrubs that don’t. 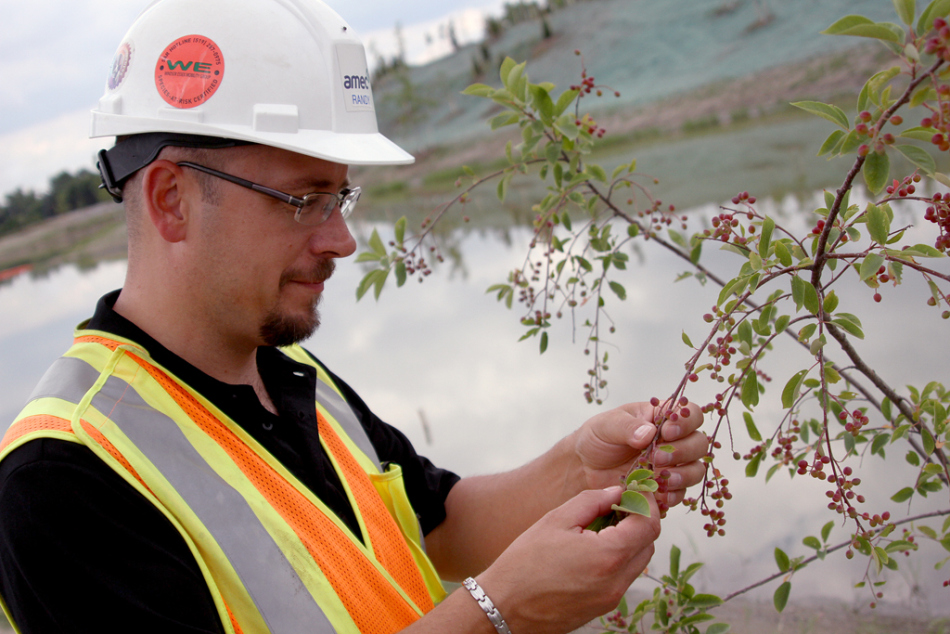 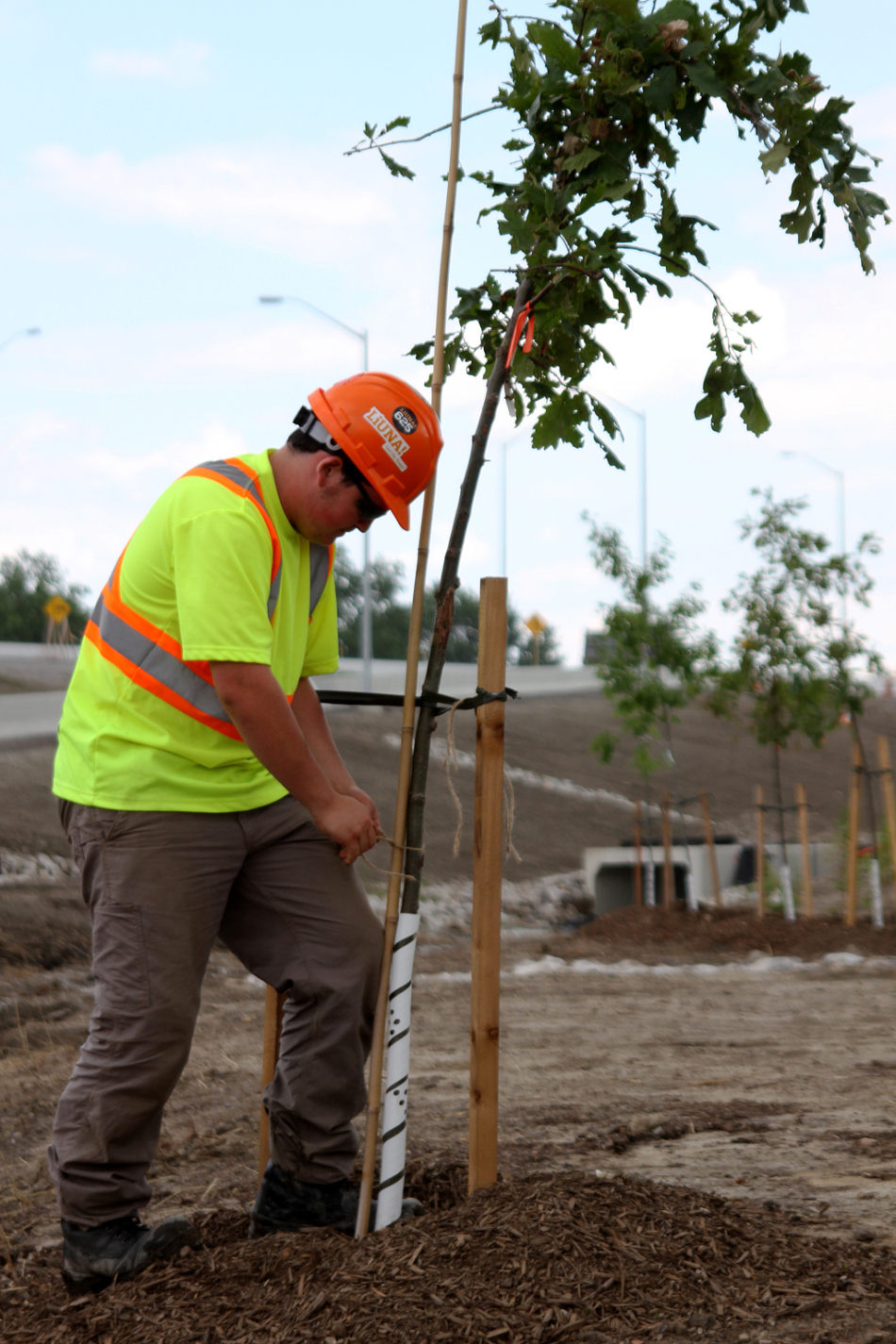 Tying all the trees and shrubs together will be 39,000 individual ground cover specimens for a total of 103,000 individual plantings. Hence the 40 landscapers in their orange vests and the five hydro-seeders laying down new grass in between all the potted plants.

“This is unique, I think, developing a Carolinian landscape theme with this type of topology,” says Randy Brunatti, Environmental Manager for Parkway Infrastructure Constructors, the builders of the final leg of Highway 401.

Every big highway project in Canada involves landscaping, Brunatti said this week. But even the biggest ring road projects around Calgary, Edmonton and Winnipeg – which are three to four times the length of the Gray Parkway’s 11.5 km – have only one tenth of the plantings.

The Windsor project is also unique in that it will recreate four types of landscapes requested by local citizens during the public consultation that preceded construction: one for screening noise and traffic views from the pedestrian paths and nearby homes; one visible only to traffic on the lower roadway; one to surround the seven, 3.5-metre-deep storm water management ponds along the highway; and a fourth just for ecological purposes.

A native of Ajax, Brunatti transferred here to work on the DRIC highway project three years ago and lives in Amherstburg. He started procuring some of those 103,000 plants back in 2011, placing orders all over the province. He’s a terrain geologist with 24 years experience and has done highways before.

More than a dozen varieties of shrubs will be planted, most of which will be known to local gardeners, including prickly ash, nannyberry, winged sumac, witch hazel, red-osier dogwood, silky dogwood and buttonbush. Several kinds of native grasses will also be seeded.

The only planted areas close to being finished are at the far western end of the project, where the new highway ends at Ojibway Parkway, near the Dainty Rice plant.

The earthen berms on either side of the expressway and the highway are called the “Western Gateway” to the project, and they feature some of the Carolinian species that will be planted along the length of the road, from oak savannah to tallgrass prairie.

Special problems they’ve encountered working here? “Windsor is definitely a more challenging landscape to work in, so we’re doing more watering” than is necessary in most other locations, Brunatti said.

July and August are normally no-transplant months here due to the searing heat. But recent fierce rains have helped during tree planting and should reduce the usual 10 per cent kill rate expected among the plantings.

You might think, as I wrongly did, that a landscaping pro would get a stomach full at work and have nothing to do with the subject at home. Not Brunatti. “My wife and I garden quite a bit as a hobby. I find it quite therapeutic,” he said. Except that at home his wife is the flower expert focused on aethestics while he concentrates on vegetable gardening.

After everything is planted, Brunatti’s company will monitor the finished work for the next 30 years, which is the life of the highway management contract PIC has signed with the Ontario government. There will be annual inspections of the entire landscape and replantings where necessary every five years.

“If you drive along Matchette Road near the Ojibway Prarie complex, that’s the model we’re working towards,” Brunatti says. “Large, good canopy trees and very robust grassland. That’s what it will look like.

“But it takes time for the landscaping to mature and naturalize. It will take a long time … 20 years before it gets to where it should be.”

I look forward to every year of watching it grow. 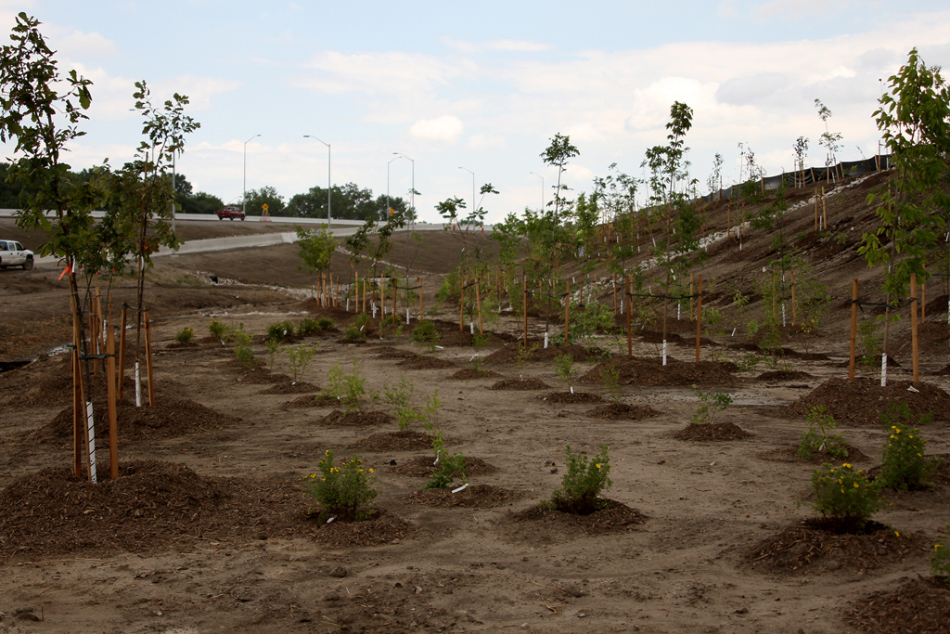