Aug 10, 2014, The Windsor Star
A lot of high-ranking bureaucrats and politicians have taken over the reigns the past decade to push the planned government-backed Detroit River bridge to the brink of construction. 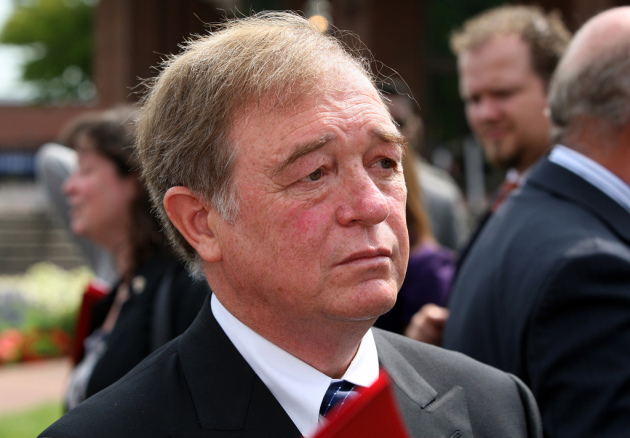 Enter CEO Mike Cautillo and board chairman Mark McQueen — named last week as leaders of the new Windsor-Detroit Bridge Authority by the Harper government to get the job done.

“I’m very conscious a lot of good people brought things this far,” McQueen said. “Now it is our job is to put the puck in the net.”

While complete strangers to Windsorites, those who know them say the two have the right combination of ability, confidence and experience to ensure the long-awaited Detroit River International Crossing will open by its targeted 2020 completion date.

“They chose the right guy, that’s the bottom line,” said Greg Percy, president of Go Transit in Toronto of Cautillo. “If anyone can get that (bridge) done, he can. You have the right guy on the job.”

Cautillo, as CEO for the bridge authority, has already spent the past week working in Windsor and started house hunting to reside here full time with his wife.

His first task is to establish a WDBA office in Windsor that will employ nearly 40 accountants, legal experts, engineers and other administrative staff for the bridge project.

Percy worked closely with Cautillo in Toronto on transportation projects off and on the past 15 years — most notably on the $450-million Union Express airport railway project.

Percy indicated Cautillo has a strong ability to bring together the public and private sectors to get a major infrastructure project completed — paramount in making the DRIC bridge a reality.

The Canadian government is paying nearly the full cost for the DRIC bridge, plazas and Detroit feeder roads, but will select a private sector operator to build and operate the crossing.

“(Cautillo) knows how to pull those very different thinking groups together,” Percy said. “He can harness their divergent interests, pull them all together and ensure the project gets done. I saw him do that on the airport railway project.

“He is inherently a collaborator. He will find that path that works.”

Carol Wilding, CEO of the Toronto Region Board of Trade, has worked with Cautillo the past seven years where he was chairman of the board’s infrastructure committee.

It’s a volunteer position where Cautillo worked to flush out financial details and help promote Metrolinx’s massive regional transportation plan in the GTA known as the Big Move on behalf of the board.

“He was very instrumental in developing a financial strategy for that plan,” Wilding said. “He was the key guy.

“He put in long hours and worked in consultation with many senior members of different industries and backgrounds. He is literally a bridge builder and consensus builder.”

She believes Cautillo is a “great fit” to lead the DRIC project — notably since he has been involved behind the scenes for DRIC the last eight years as a financial consultant in his primary job with Deloitte.

“He understands the challenges and complexities,” Wilding said. “He is somebody who will work well with stakeholders and bring people together.

“He is a passionate advocate for infrastructure and transportation with a track record of getting stuff done. I think you will see him do things whole-heartedly and really stay with it.”

Cautillo told The Star being given the WDBA’s top job is a “great opportunity” and expressed quiet confidence.

“We will get it done by the time frame articulated,” he said. “While many people see challenges for us, I see opportunities for Michigan and Canada to work together to resolve any issues and get on with constructing the bridge.”

After the office staff is set up in Windsor, everyone will quickly get to work, he said.

“We need to set up the authority from scratch,” Cautillo said. “We need to hire resources, undertake the design, the procurement and then securing a concessionaire who will be operating the facility for us.”

He described himself as being “very familiar” with the DRIC project with “intimate knowledge of the issues” and “challenges we have to overcome.”

“I’m very much looking forward to getting the project done,” he said.

While Cautillo will work daily in Windsor to get the bridge done, McQueen, as WDBA’s chairman, will largely remain in Toronto aside from being here to oversee board meetings.

McQueen is the son of award-winning business journalist and author Rod McQueen, but has long made his own name in Toronto circles as CEO of his own company — Wellington Financial — on Bay Street, helping lead numerous charitable organizations and as long-time director and a former chairman of the Toronto Port Authority.

He also worked for a few years in the early 1990s as an executive assistant in the office of prime minister Brian Mulroney.

In an exclusive interview with The Star, he admittedly has rarely been to Windsor; he mentions passing through en route to Tiger games in Detroit while an undergrad student at University of Western Ontario.

McQueen also only has a passing knowledge of what has occurred in terms of hundreds of community meetings or vicious opposition and lawsuits by Ambassador Bridge owner Matty Moroun to stop the DRIC project.

Unlike Cautillo, he shows little concern for the past soap opera around the bridge project.

“There is a history, but as far as I’m concerned that’s water under the bridge,” McQueen said. “I may not have a lot of local knowledge, but I’m highly sensitive this needs to be done right.”

His mindset entering the DRIC project is not “to pretend I have all the answers.”

“But just give me a few weeks to get a sense of the vast array of 500 to 600 things that have to happen between now and when this is done,” he said.

“I look forward to the day when the mayor and everyone else will be there to open this and we can say ‘done.’’’