Parkway worker believed to have been crushed during concrete pour

Jun 18, 2014, The Windsor Star
The Herb Gray Parkway worker who died in a construction accident Tuesday was crushed by a massive steel form, according to sources close to the project. 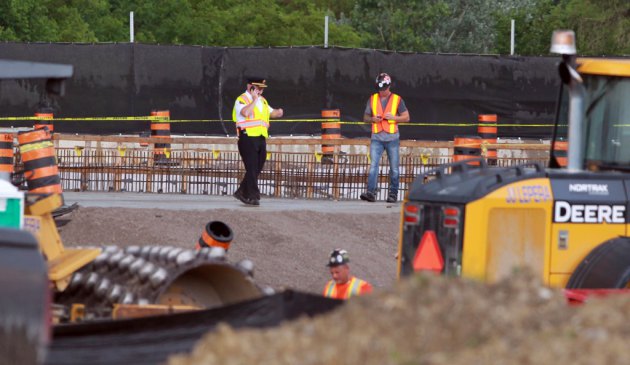 The Ontario Provincial Police are investigating an industrial accident after a worker was killed at the Herb Gray Parkway in LaSalle, Ontario. (JASON KRYK/The Windsor Star)

The 40-year-old worker, who was employed by PCR Contractors, has not yet been identified by parkway officials, police or labour ministry. The family also requested his identity not be immediately released.

Four orders were issued by Ontario’s labour ministry Wednesday against PCR Contractors, the local company responsible for the portion of construction work on the $1.4-billion Herb Gray Parkway.

The worker was believed to be assisting with a concrete pour on a bridge deck on what’s known as the parkway’s Huron Church Road crossing located between Todd Lane and Cousineau Road.

Worker, 40, killed in Parkway industrial accident
He was helping to remove the form used for the pour when it is believed a gust of wind suddenly lifted the massive steel form as it was being raised by a crane and crushed him.

“It was reported that the worker was found with critical injuries trapped between two objects at the project,” said Bruce Skeaff, spokesman for the labour ministry in a statement. “The worker succumbed to these injuries.”

The ministry is still continuing its investigation, he said.

The parkway’s contractor is a Spanish-led consortium known as the Windsor-Essex Mobility Group.

“We’ve been instructed all questions and inquiries are to be directed to the Ministry of Labour which has taken over the investigation,” said Cindy Prince, spokeswoman for WEMG. “Right now, everybody is very focused on assisting the ministry.

“We are all deeply saddened by what’s occured.”

Among orders issued to PCR were:

Executives with the company did not return a message from The Star.

A statement was provided by the company:

“PCR is deeply saddened by the loss of our employee in this tragic workplace accident. Our thoughts are with all of our workers, and in particular the family of our lost employee. We are currently conducting a thorough investigation into the root cause of this accident.”

PCR has long been involved in a number of major construction projects both locally and throughout North America. In Windsor, they include construction of the WFCU Centre and the University of Windsor’s Engineering building.

The company has a good record in terms of safety and training staff, said Jim Lyons, president of the Windsor Construction Association.

“These guys are experienced builders that know the ins and outs and are very accomplished,” he said. “Any tragedy on their books is really rare.”

Lyons happened to be driving by the parkway site around 4 p.m. on Tuesday and his heart sank when he saw police and ambulance on the scene.

“There is no doubt construction is a high-risk industry and certain aspects tend to be very dangerous,” he said.

The parkway project has been strong in emphasizing workplace safety, Lyons said. There was a monthly workplace safety meeting around noon on Tuesday – just hours before the accident – involving a joint labour-management committee with the labour ministry officials also in attendance.

“We have been doing better across the province with a lot of efforts put forth to force training for every worker,” Lyons said. “There is more job site work safety training than ever before and how to avoid things.”

Lyons guessed the labour ministry’s investigation will include interviewing numerous workers, studying a coroner’s report and holding an inquiry, so it will likely be months before any conclusions can be made on exactly what happened that led to the deadly construction accident.

Ontario’s Ministry of Transportation is also overseeing construction of the parkway.

“I was deeply saddened to hear that an incident occurred on the Rt. Hon. Herb Gray Parkway project which resulted in the death of a worker employed by a subcontractor,” said Transportation Minister Glen Murray.

“My thoughts and deepest sympathies are with his family, relatives, friends and colleagues during this very difficult time. A thorough investigation is currently underway by the Ministry of Labour.”

The worker was a member of the Labourers’ International Union of North America Local 625.

They also provided grief counselling to co-workers in close proximity to the accident or witnessed what occurred.

“We still don’t know exactly what happened,” he said. “I do know at least three of our members attempted to provide CPR until the ambulance arrived.”

He summarized his own emotions and all those working on the project as having a “sick feeling in their stomach” regarding the tragedy.

“You wonder how something like this can happen,” Petroni said.

Parkway project leaders have “done everything humanly possible” to prepare and train workers before entering the highway construction site, he said.

Workers were told to stay home Wednesday out of respect for the victim of the accident.

Petroni expects those involved in witnessing the incident will not have to return to work until they receive counselling and are ready.

The parkway’s contractor has issued a notice to all contractors that their workers be allowed to have the day off to attend the funeral which is expected to be on Monday, he said.

He described PCR as having “an impeccable safety record.”

“Something like this has never happened before with this company and they have been around for a very long time,” Petroni said.

Sadly about an hour after the construction death, a second worker accident occurred on the parkway site which triggered another labour ministry investigation and a stop work order against the company involved.

Just before 5 p.m. Tuesday an unidentified worker was critically injured when a wire on a concrete saw cutter snapped. The victim – an employee of Ottawa-based Graff Penhall Company – was transported to hospital.

“It was reported that a worker was cutting cement when he sustained a leg injury,” Skeaff said.

In connection with that incident, the labour ministry issued two orders Wednesday against the concrete cutting company.

One calls on Graff Penhall to ensure all vehicles, machinery, tools and equipment are maintained in a condition that does not endanger a worker. The other is a stop work order that any work with a specified concrete wire cutting saw must cease by the company until the initial order is complied with.

The parkway worker’s death Tuesday is the first local job-related death since last December when an apprentice electrician from Leamington was killed at a local company’s job site outside Toronto. Wayne Affleck, 27, was found without vital signs in the electrical room of a new solar farm in Sunderland, Ont. He was an apprentice working for Kingsville’s EnerQuest Services Inc.

It was the first construction job-site death in Windsor since June, 2011, when Takis Escoto, 34, a Coco Paving labourer, was killed on a water main project. He died of massive internal injuries sustained when he was struck by a front-end loader being driven in reverse.